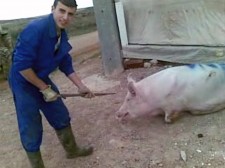 Both men received a one year prison sentence and have been banned from working with animals for three years. The third man is on the run.

"This is the highest penalty for abuse to farm animals in the history of Spain and we are glad that the animal abusers were found guilty," said Javier Moreno, International Director of Animal Equality who exposed the case.

“This is the highest penalty for abuse to farm animals in the history of Spain and we are glad that the animal abusers were found guilty,” said Javier Moreno, International Director of Animal Equality who exposed the case.

He added, “At Animal Equality we will continue exposing the suffering of animals in the meat industry to create a society in which farm animals are protected.”

The images, which were captured by one of the workers, showed farm staff brutally hitting pigs with iron bars and stabbing them with swords while mocking their suffering in front of the camera. The video also shows one of the workers opening up a pregnant pig’s abdomen and uterus with a knife in order to remove her babies while she was still conscious.

In an interview (in Spanish), the whistleblower admitted to Animal Equality that those were standard practices that took place every day at the farm.

The police detained three workers 48 hours after Animal Equality reported the crimes and turned over the evidence.

The three former employees at the farm faced trial over animal abuse charges today (Tuesday, September 27th) at criminal court No. 3 of Cartagena. Animal Equality represented the public at the trial.

Animal Equality is an international farmed animal advocacy organization working in Spain, the United States, England, Italy, Germany, Venezuela, and India. Animal Equality has over two million supporters and works through education, advocacy, and investigations in order to promote social and legislative changes that benefit animals.

For more information or to interview Javier Moreno contact: Sarah Pickering, Int. Director of Communications, Animal Equality at sarahp@animalequality.org or on cell: +1 (424) 305-0165.​​​

Get notified about new releases.